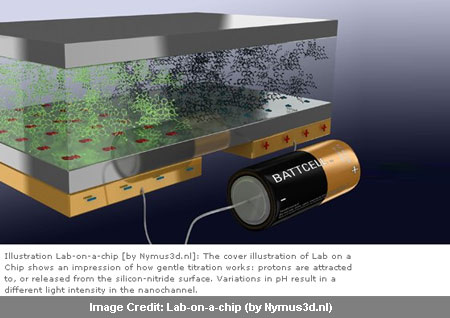 The reaction of individual cells or proteins to changing pH levels in the body may not have been clearly understood in the past. However a new finding claims to evaluate the effects of pH changes on the biomolecules. Yes, it might just be able to adjust acidity with impunity.

Scientists at the MESA+ Institute for Nanotechnology at the University of Twente have supposedly developed a method that ‘gently’ adjusts pH. Seemingly it does so without damaging biomolecules. Soon this should enable the researchers to measure the activity of a single enzyme as a function of pH.

Presently, methods for adjusting pH appear to frequently have unpredictable effects on the immediate environment of a cell or biomolecule. With pH levels probably not changing quickly enough, it could lead to electrochemical reactions that may affect the measurements. This in turn could make it difficult to record the happenings of pH changes or the measurement itself could generate unnecessary side effects.

The new technique developed by researcher Rogier Veenhuis and his colleagues seems to resemble traditional titration. However it appears to be controlled electrically and occurs with the help of extremely small volumes of solution. The high-spot of this process is reportedly its ‘gentle’ approach that appears to leave out undesirable side effects.

Armed with silicon nitride, the researchers reveal that light intensity could indicate pH. Silicon nitride was the base of the micro and nano fluid channel. Below it an electrode was attached. When given a negative charge, it seemed to have led to protons being attracted to the nitride surface, probably causing the solution to become more basic and increasing the pH.

Much in contrast to this, a positive charge saw a release of the protons from the surface with the solution be coming more acidic and decrease in the pH. Unlike electrolysis, this method didn’t seem to have any reaction on the electrode as the silicon nitride apparently acts as an insulator. With this arrangement appearing to create a kind of capacitor, acidity it was observed could be adjusted by simply ‘fiddling with the knob’ to change the electrical current. Taking the help of a fluorescent pH indicator to the solution, the changes could be made visible as light intensity appears to reflect changes in pH.

Occurring in very small quantities, this new titration method may also involve substances that can be titrated in the attomol range (10-18 mol). This, researchers indicate should help them measure the activity of a single enzyme as a function of pH in due course of time.

This finding is available online and was anticipated to be published as an ‘inside cover’ story in the December 21st edition of the journal Lab on a Chip.