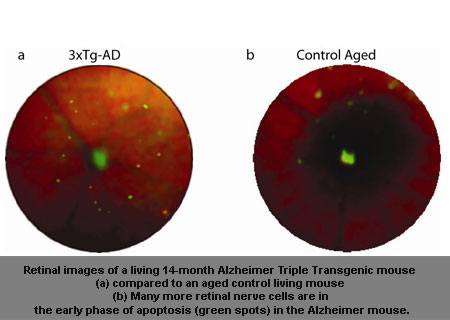 Here’s some information for people concerned about Alzheimer’s disease. A new research by UCL claims that an easy and economical eye test may perhaps help in the identification and diagnosis of chief neurological diseases like Alzheimer’s at an initial stage than is at present feasible.

The findings illustrate a novel method that facilitates retinal, and consequently brain cell death, to be promptly calculated in real time. The process, supposedly exhibited in an animal model, could not only improve diagnosis of neurodegenerative disorders and aid in trailing disease progress; it possibly also assists in the evaluation and growth of new treatments.

The new method applies fluorescent markers that appear to fasten themselves to the pertinent cells and signify the phase of cell death. The retina is subsequently noted via a customized laser ophthalmoscope. So far, this type of procedure has apparently only been utilized in cells in the lab, as opposed to live animals. This research is consequently claimed to be the first ever in vivo exhibition of retinal nerve cell death in Alzheimer’s disease.

Professor Francesca Cordeiro, UCL Institute of Ophthalmology, Lead author of the research, commented, “The death of nerve cells is the key event in all neurodegenerative disorders – but until now it has not been possible to study cell death in real time. This technique means we should be able to directly observe retinal nerve cell death in patients, which has a number of advantages in terms of effective diagnosis. This could be critically important since identification of the early stages could lead to successful reversal of the disease progression with treatment.”

Professor Cordeiro added, “Currently, the biggest obstacle to research into new treatments for neurodegenerative diseases is the lack of a technique where the brain’s response to new treatments can be directly assessed – this technique could potentially help overcome that.”

She remarked, “The equipment used for this research was customized to suit animal models but is essentially the same as is used in hospitals and clinics worldwide. It is also inexpensive and non-invasive, which makes us fairly confident that we can progress quickly to its use in patients. Few people realize that the retina is a direct, albeit thin, extension of the brain. It is entirely possible that in the future a visit to a high-street optician to check on your eyesight will also be a check on the state of your brain.”

Professor Cordeiro’s team are said to be carrying on additional research by means of the same practice to discover and evaluate glaucoma. They may also be performing their first patient trials later this year.

The research was published in Cell Death & Disease.