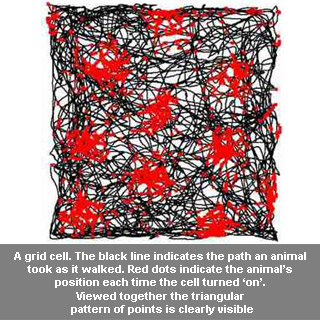 This is an interesting study on the intricate workings of the brain. A research from UCL claims that ‘grid cells’ that appear to perform like a spatial map in the brain have apparently been recognized for the first time in humans. This may clarify as to how one forms internal maps of new settings.

The research seems to apply brain imaging and virtual reality methods to attempt in recognizing grid cells in the human brain. These specific neurons are believed to be caught up in spatial memory and have formerly been detected in rodent brains, but confirmation of them in humans has apparently not been recorded until now.

Grid cells appear to signify where an animal is placed in its setting, which the scientists equate to having a satnav in the brain. They supposedly shoot off patterns that emerge as geometrically usual triangular grids when contrived on a map of a steered surface. They were found by a Norwegian lab in 2005 whose research proposed that rats generate implicit grids to aid them familiarize themselves in their surroundings, and remember new places in foreign territory.

Lead author Dr Christian Doeller, commented, “Although we can’t see the grid cells directly in the brain scanner, we can pick up the regular six-fold symmetry that is a signature of this type of firing pattern. Interestingly, the study participants with the clearest signs of grid cells were those who performed best in the virtual reality spatial memory task, suggesting that the grid cells help us to remember the locations of objects.”

Professor Neil Burgess, who leaded the team, mentioned, “The parts of the brain which show signs of grid cells – the hippocampal formation and associated brain areas – are already known to help us navigate our environment and are also critical for autobiographical memory. This means that grid cells may help us to find our way to the right memory as well as finding our way through our environment. These brain areas are also amongst the first to be affected by Alzheimer’s disease which may explain why getting lost is one of the most common early symptoms of this disease.”

Study co-author Dr Caswell Barry is of the opinion that it is as if grid cells provide a cognitive map of space. In fact, these cells are very much like the longitude and latitude lines one is familiar with on normal maps, but instead of using square grid lines it seems the brain uses triangles.