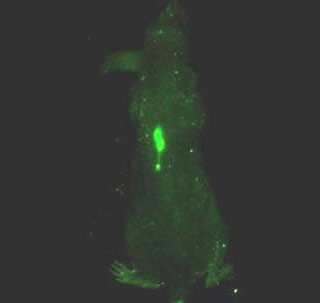 Previously we had presented a report claiming fluorescent nanoparticles to be beneficial for cancer detection in humans. Scientists worldwide are analyzing various nanotechnologies that can potentially aid in delivering anticancer drugs wherein only cancer cells are affected. Researchers form the University of California, Los Angeles (UCLA) claim to have undertaken several comprehensive analysis on mice with human tumors and moved a step closer to identifying the nanotechnology which may be helpful.

Scientists have ascertained that mesoporous silica nanoparticles (MSNs) that are minute particles with innumerable of pores can store and deliver chemotherapeutic drugs in vivo and potentially restrain tumors in mice. After the administration MSNs seem to gather particularly in tumors. The researchers suggested that after the nanoparticles have delivered their chemotherapeutic drugs, they are excreted from the body.

Fuyu Tamanoi, a UCLA professor of microbiology, immunology and molecular genetics and director of the signal transduction and therapeutics program at UCLA’s Jonsson Comprehensive Cancer Center commented, “Our present study shows, for the first time, that MSNs are effective for anticancer drug delivery and that the capacity for tumor suppression is significant.”

MSNs are assumed to circulate in the bloodstream for longer periods of time and gather particularly in tumors. The scientists mentioned that once the MSNs are attached with a targeting moiety, tumor accumulation may be further enhanced. Having conducted various analyses together in laboratories, the researchers found that the xenograft tumors of mice treated with camptothecin-loaded MSNs appeared to shrink and fall back.

Jie Lu, lead researcher a postdoctoral fellow in Tamanoi’s lab added, “Two properties of these nanoparticles are important. First, their ability to accumulate in tumors is excellent. They appear to evade the surveillance mechanism that normally removes materials foreign to the body. Second, most of the nanoparticles that were injected into the mice were excreted out through urine and feces within four days. The latter results are quite interesting and might explain the low toxicity observed in the biocompatabilty experiments we conducted.”

After the completion of the treatment, not only the mice were registered to be tumor free but also lack of acute and long-term toxicity of MSNs to the mice was reported. Although initially mice suffering with breast cancer were employed, similar results were possibly obtained from mice with human pancreatic cancer.

Jeffrey Zink, a UCLA professor of chemistry and biochemistry enlightened, “We can modify both the particles themselves and also the attachments on the particles in a wide variety of ways, which makes this material particularly attractive for engineering drug-delivery vehicles.”

Tamanoi affirmed, “Comprehensive investigation with practical dosages which are adequate and suitable for in vivo delivery of anticancer drugs is needed before MSNs can reach clinics as a drug-delivery system.”

Further research will be conducted to test MSNs in various animal-model systems. Also, large scale studies will be undertaken to observe the safety of MSNs.

The research is published in the July 8 issue in the journal Small.