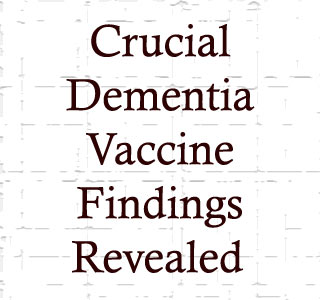 With several people affected by Alzheimer’s disease, scientists seem to be engrossed in finding possible effective treatments for the ailment. Investigators from the University of Southampton have apparently declared novel evidence of the hallmark protein build-up that takes place during Alzheimer’s. The close association between two proteins involved with Alzheimer’s disease was possibly unfolded for the first time.

During the 2002, phase 2, AN1792 (Elan) vaccine trial, some volunteers reported severe side-effects, hence the trial was held back. In order to analyze the effect of the vaccine on the brain, the investigators followed patients of the trial itself. It then appeared that the vaccine targeted at clearing the hallmark build-up of the amyloid protein from the brain and simultaneously scattered the second key protein, tau, from nerve cell branches.

Dr Delphine Boche, from the University of Southampton, added, “The findings show that treatment aimed at amyloid may also modify tau changes in Alzheimer’s. The lack of change in tau in the bodies of nerve cells might explain why the people in the original AN1792 trial didn’t experience an improvement in cognitive functioning even though we saw amyloid clearance. This study demonstrates a link between these two Alzheimer’s-related proteins, which has been suspected but not clearly demonstrated in the human brain. The findings give us more basic information about the interaction between beta amyloid and tau in Alzheimer’s and may clarify how the disease progresses in the brain.”

The vaccine was ascertained to clear the tau protein ‘tangles’ from the cell branches only and not from the nerve cell body. This could be a suitable reason for why the vaccine failed in improving patients’ dementia and suggests it as a vital treatment target. Around three years ago, Teresa O’Dwyer’s husband, Peter, was diagnosed with Alzheimer’s disease. Teresa claims that her husband is losing the ability to write or use a knife and fork. Gradually, his abilities appear to diminish and nothing much can be done about that.

Rebecca Wood, Chief Executive of the Alzheimer’s Study Trust, the UK’s leading dementia study charity, explained, “These are important findings and reveal the tau protein to be a key target in our fight against Alzheimer’s disease. It’s crucial that we identify as many treatment targets as possible for this incredibly complex disease to increase the chances of swift progress. Over 15,500 people in Hampshire are living with the daily reality of Alzheimer’s disease and other forms of dementia, one of the highest county figures in the UK. Study is the only answer to dementia, yet UK scientists remain the poor relations in comparison to other serious diseases. With the right level of support, our scientists can help avert the massive increase in numbers living with dementia forecast for the next generation.”

It seems that we can overcome diseases like Alzheimer’s by only conducting investigations and discovering novel treatments targets for the disease.

The study was funded by the Alzheimer’s Study Trust.