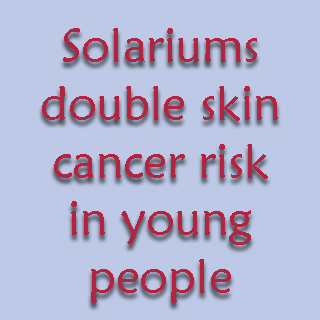 Many individuals tend to adopt various procedures for skin tanning. With tanning injections proved to be harmful for health, here is another investigation which may advice to avoid skin tanning. Investigators claim that solariums double the risk of skin cancer in youth before the age of 40.

Claimed to be a novel study, the scientists noted the age differences in the risk of skin cancer linked with solariums. At the time of the study, investigators analyzed usage of solarium and melanoma risk in people under the age of 40. The correlation between increased risk of melanoma and solariums was revealed. However, the experts were possibly unable to declare the susceptibility of young people to exposure of harmful UV radiation.

Dr Anne Cust of the School of Population Health at the University of Melbourne said, “Our findings indicate that solarium use causes around three quarters of melanomas occurring in people 18-29 years of age who have used a solarium, and the risk of being diagnosed with skin cancer doubles if first exposure to solariums happens before the age of 20. We estimate that a large proportion – over 16 per cent – of melanoma cases in young people could be prevented in Australia by avoiding solarium exposure.”

The study also displayed elevated risk with aggregate use of solariums. During the study, scientists interviewed more than 600 people between the age group of 18 and 39 years. All the study subjects had skin cancer probably due to every day usage of solariums. It was suggested that solariums are commonly employed in developed countries. So this risk may have public health importance.

The study is published in the latest edition of the International Journal of Cancer.

Stem cell breakthrough made by scientists