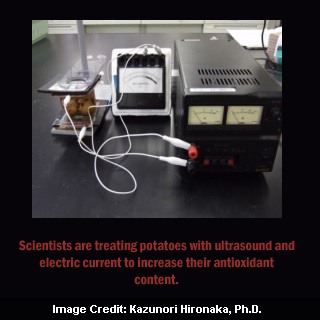 Be it mashed potatoes, French fries or chips, potato is considered as one of the favorite side dishes of the Western world. While these versions of the high in potassium content vegetable may not be so healthy, researchers are said to have made it more nutritional. Scientists have supposedly elevated the amounts of healthful antioxidant substances in potatoes by either giving spuds an electric shock, or zapping them with ultrasound, high frequency sound waves.

In the ultrasound treatment, the researchers immersed whole potatoes in water and made them to undergo ultrasound for 5 or 10 minutes. On the other hand, in the electrical treatment, potatoes were submerged in a salt solution for 10 seconds and the spuds were treated with a small electrical charge for 10, 20, and 30 minutes. The antioxidant activity as well as the phenolic content of these potatoes was examined by the experts. It was concluded that stresses heightened the quantity of these compounds.

Kazunori Hironaka, Ph.D., who headed the research affirmed, “We found that treating the potatoes with ultrasound or electricity for 5-30 minutes increased the amounts of antioxidants — including phenols and chlorogenic acid — by as much as 50 percent. Antioxidants found in fruits and vegetables are considered to be of nutritional importance in the prevention of chronic diseases, such as cardiovascular disease, various cancers, diabetes, and neurological diseases.”

The findings were presented at the 240th National Meeting of the American Chemical Society (ACS).