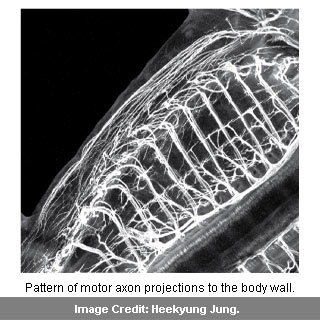 Though there is apparently a lack of treatment for Lou Gehrig’s disease, patients may be subjected to physical therapy and rehabilitation techniques. The following discovery can probably open doors to new treatments for people suffering from this ailment. Investigators from the NYU Langone Medical Center claim to have discovered a single type of gene acting as a master organizer of motor neurons in the spinal cord.

This ‘master organizer’ a member of the Hox family of genes is seemingly known for regulating the overall pattern of body development. Hox genes are believed to cause a cascade of gene expression in the early embryo. It is with this cascade that these genes can possibly allow the creation of an animal’s overall structure and body part orientation.

“We knew that there were 21 Hox genes that determine how connections are made between motor neurons in the spinal cord and muscles in the limbs. But what was surprising to us in this study was that a single Hox gene acts as a global organizer of motor neurons and their connections. The next step will be to see how Hoxc9 in motor neurons affect motor behaviors such as walking and breathing,” remarked Jeremy S. Dasen, PhD, an associate professor in the Departments of Physiology and Neuroscience at NYU Langone Medical Center and a Howard Hughes Medical Institute Early Career Scientist.

These genes first observed in fruit flies have displayed Hox activity in mammals. It is known that humans include 39 such genes and 21 have been found to coordinate as motor neurons in the spinal cord. In order to control the variety of muscle cells used to coordinate movement, innumerable amounts of motor neurons are apparently required in mammals. Accuracy of function performance may depend upon every single neuron present in the embryo finding its way from the spinal cord to the group of muscles that it is equipped to regulate.

Dr. Dasen remarked, “What we are trying to understand is how the nervous system is wired to control movements such as breathing and walking and see how genetic programs can further control these circuits in terms of exploring this paradigm as a way at looking at the vital circuits of the body.”

The research was published in the September 9, 2010, issue of Neuron.

Novel research hints at the slimming effect of probiotics

Heart Beat would be able to power the Pacemaker: Research