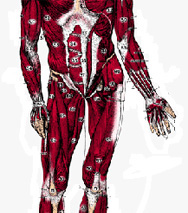 A study conducted in the US has said that lower cholesterol levels may actually reduce muscle gain with the help of exercise. The report was published in the Journal of Gerontology.

The researchers said that they were actually surprised to find a significant association between dietary cholesterol and change in strength in the 55 men and women who were aged between 60 and 69. The participants were assessed over a 12 week period.

The lead investigator of the study Steven Riechman who is an assistant professor of health and kinesiology said that those who had higher cholesterol intake had the highest muscle strength gain. Cholesterol circulating in the blood also seemed to have contributed to greater muscle gain.

According to the report, the subjects who were taking cholesterol-lowering drugs while taking part in the study showed lower muscle gain totals than those who were not.

In a statement Riechman was quoted as saying, “One possible explanation is through cholesterol’s important role in the inflammation process. We know that inflammation in some areas, such as near the heart, is not good, but for building muscles it may be beneficial, and cholesterol appears to aid in this process.”