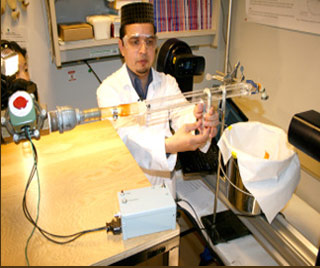 Various airborne diseases are known to spread through coughing. With lack of accurate measures to avoid disease transmission, investigations in this field may prove beneficial. Medical and engineering researchers from the University of Alberta have developed a drug that when inhaled seemingly decreases or eliminates the amount of droplets, called bio-aerosols, being released when a disease-infected person coughs.

The size and quantity emitted of these bio-aerosols was analyzed by the scientists. It is believed that these bio-aerosols stay in the air for minutes sometimes even hours. With the help of a machine that simulates coughs, experts examined how newly developed drug manipulates properties of the lung fluid to almost completely suppress emission of droplets. This drug was supposedly developed by Malcolm King and Gustavo Zayas who work in Pulmonary Medicine at the Faculty of Medicine and Dentistry. Apparently, the number of fine droplets has been reduced by more than 95 per cent.

Various formulations of the drug have been experimented that alter properties of mucous and the most effective mixture to eliminate fine droplets may be acquired. The ability of this unique drug will be further experimented on humans. The drug can be possibly prescribed to individuals infected with a new strain of flu.

The research is published in the journal Non-Newtonian Fluid Mechanics.