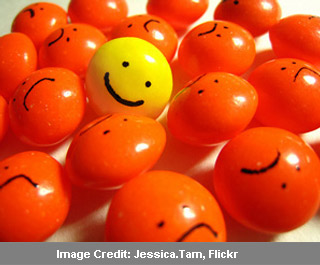 Generally it is believed that thinking happy thoughts, focusing on the good and downplaying the bad accelerates recovery from depression, bolster resilience during a crisis and improves overall mental health. Now University of Washington psychologists suggest that pursuing happiness is not beneficial across all cultures. The study findings can probably aid the Japanese victims to recover from natural disasters and subsequent nuclear crisis in March.

The study comprised 633 college students who were a mix of Asian immigrants, Asian Americans and European Americans. These students were asked to rate how much stress and depression they felt and how often they’ve been in a sad mood, felt worthless or had sleep or appetite changes. Also the intensity of the positive emotions that they felt, including feelings of serenity, joy, confidence and attentiveness was rated. Those from the European-American background reported a significant association between positive emotions and less depression or stress.

“If we are to relieve some of the trauma from the tsunami and earthquakes, we have to be careful of imparting Western therapies,” enlightened Janxin Leu, UW assistant professor of psychology. “I worry that if a therapy which relies on positive emotions and thinking is used with Asian patients it will not be effective and may even make patients feel worse.”

This correlation between emotions and depression or stress appeared subtle among Asian-Americans, but for Asians, there was no such link. Scientists point out that Asians interpret and react to positive emotions differently in regards to their mental health. For Asians happiness possibly signals that something bad will happen next. It was asserted that psychotherapies emphasizing positive emotions can relieve stress and depression in white populations, not Asians. Mindfulness therapies that encourage patients to pay attention to the good and the bad will presumably work better for the Asian population.

The study was published online on March 28 in the journal Emotion.