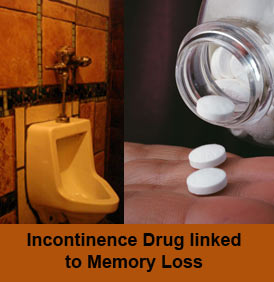 According to a study, Incontinence drug has been linked to cause memory problems especially in older people. The findings have been derived from an analysis of the medication use and observations of the drug’s effect for 8 years and the subjects were older Catholic priests, nuns and brothers.

“Our message is to be careful when using these medicines,” said U.S. Navy neurologist Dr. Jack Tsao, who led the study. “It may be better to use diapers and be able to think clearly than the other way around.” Jack added that there are alternative non-drug methods to treat urinary incontinence. Exercises, biofeedback and keeping to a schedule of bathroom breaks are some of the alternative methods which resolve urinary incontinence without the drug use.

USA has seen a very high usage of incontinence drugs with a sale of $3 billion in 2007 (according to IMS Health, which tracks drug sales). The research of the drug started when Jack met a 73-year-old patient, who after having a few doses of the drug started hallucinating conversations with dead relatives and having memory problems. Her memory problems came back to normalcy when she stopped consuming the drug. This made Dr. Tsao to observe a larger group of people to check if they could measure an effect of these and other medications that affect acetylcholine, a chemical messenger that shuttles signals through the brain and the rest of the nervous system.

Tsao suggested more appropriate research on the drug and recommended that doctors should do a baseline cognitive testing on patients before prescribing the drugs. The findings were released at a meeting of the American Academy of Neurology