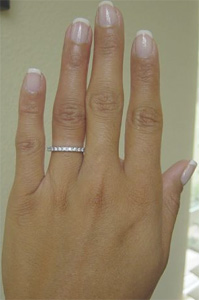 A new study, which happens to be the first of its kind, suggests that women who have long ring fingers are more likely to face a greater risk of developing arthritis of the knees. Arthritis is an inflammation of a joint accompanied by pain, swelling and stiffness.

The study was conducted by researchers from Nottingham University. It found that women with uncommonly long ring fingers had almost double the risk of osteoarthritis in the knees when compared to those with fingers of similar length.

Men tend to have longer ring fingers than women. Strangely, the study did not find them facing the same risk.

The researchers analyzed the hands of 2,000 arthritis patients and around 1,000 people with arthritis, all of whom were in their sixties.

For the study, they took X-rays of both hands of the patients and assessed the length of fingers using three different methods which included a direct visual comparison of the two finger ends, the measured ratio from base to the tip of the upper finger joints and the measured ratio of the bone lengths.

After risk factors such as joint injury and lack of exercise were taken into account, the higher risk of arthritis still remained strong for women with long ring fingers.