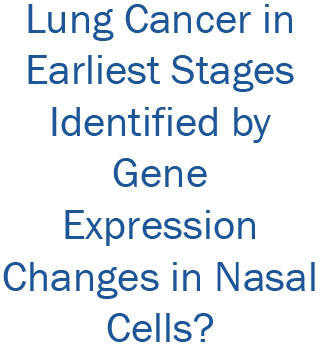 Lung cancer has been one of the major concerns as it is the most common cause of cancer mortality, most likely with an average five-year survival rate of only 15 percent. However, if detected in the early stages, it can help increasing the chances of survival. According to scientists in Boston lung cancer can now be treated in its earliest and most treatable stages by an easy and not so incursive method using cells from the interior of the nose.

For their study, the nasal epithelial cells of thirty-three smokers undergoing medically indicated bronchoscopes for suspicion of lung cancer were gathered. Of these around 21 were found to have lung cancer while the remaining eleven had benign disease. In order to study the gene expression changes brushings were taken from the right or left nostril and presented on microarrays.

“Microarrays allow us to get a detailed portrait of the expression levels of a large number of genes simultaneously, with our goal being to then sort through all these expression levels to find genes that differ in their expression between patients with lung cancer and those with benign disease,” Dr. Anderlind specified.

After identifying 170 genes that were differentially expressed between patients with and without lung cancer, the investigators also found genes linked to colon cancer and adenocarcinoma, as well as genes that trigger cell division and blood vessel growth. The point to note in this observation is that these genes were probably largely present in patients with cancer. Lower levels of genes involved in tumor suppression were also expressed.

“Our hypothesis was that the upper airway epithelium of smokers with lung cancer displays a cancer-specific gene expression pattern and that this airway nasal gene expression signature reflects the changes that occur in lung tissue,” she stated.

The study is at a preliminary stage and more in-depth analysis by other institutes too would affirm it .The development of a nasal biomarker would prove to be effective for diagnosis of lung cancer at the earliest stages. She then ended by drawing comparisons between the five year survival rates which is 60%at an early stage, to only 2 percent at a later stage.

This study if properly followed and implemented could be a ray of hope in detecting and treating lung cancer.The study will be presented at the ATS 2011 International Conference.