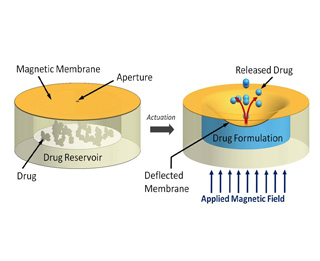 Diabetic retinopathy seems to be a major cause of vision loss among diabetic patients. A team of scientists at the University of British Columbia has put forth a device that can be fixed behind the eye for a regulated and on-demand release of drugs to treat diabetic retinopathy.

Presently, the condition is being treated by laser therapy. But the latter may have certain side effects like laser burns or the loss of peripheral or night vision. Anti-cancer drugs can also be apparently used to treat the disease. However, it may require high dosages considering that these compounds get cleared at a faster rate. This in turn exposes other tissues to toxins too.

“We wanted to come up with a safe and effective way to help diabetic patients safeguard their sight,” commented Chiao who has a family member dealing with diabetic retinopathy.

This new mechanism accelerates the drug delivery system through an external magnetic field. The team managed to do this by closing the reservoir of the device to be fixed in the eye. The reservoir is as tiny as the pin of a needle, and is sealed with an elastic magnetic polydimethylsiloxane (silicone) membrane. When a magnetic field is produced, the membrane deforms and results in the secretion of certain proportions of the drug.

In order to examine the drugs biological efficacy, they tested it against two kinds of programmed cancer cells, inclusive of those found in prostate. The release rates looked rather reliable. The docetaxel sustained its pharmacological efficiency for more than two months in the device and was seemingly able to kill off the cancer cells.

Scientists believe that the UBC device displays improved version of the current implantable devices for drug delivery. Some of the existing technologies are battery operated and are apparently large to treat the eye. Some also depend on diffusion, which means that once the device is implanted, the drug rates cannot be ceased. This may be a problem when conditions of patients’ change. Scientists believe that the UBC device will be ready only after working on it with respect to compatibility and performance optimization which may take many years.

Details of the drug delivery system have been published in the current issue of Lab on a Chip.

Does drinking coffee cut down the threat of developing advanced prostate...