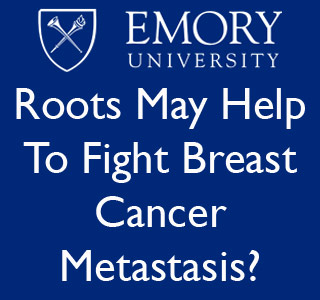 Breast cancer has always been on the speculating end with new discoveries surfacing every now and then. More recently, a research conducted by Winship Cancer Institute of Emory University scientists revealed that breast cancer cells were seemingly prevented from metastasizing in animals by a compound from roots used traditionally in India for medicinal benefits.

The compound identified as Withaferin A appears to have anti-metastatic properties that could be used as a basic ingredient for drug regimens known to prevent the recurrence of breast cancer. Further tests are being planned for the same. Ashwagandha, a familiar name in Ayurvedic medicine is also known as Withania somnifera that is the source of Withaferin A. Withaferin A formed the basis of the research as it was known to be responsible for bringing together the protein vimentin. This protein was said to have been produced excessively in cancer cells particularly in invasive tumors that seem to metastasize more often.

“Most patients who die from cancer die because of metastases, not from the primary tumor. Our objective was not to find a way to kill cells, but instead, prevent them from migrating and invading other tissues,” specified senior author Adam Marcus, PhD, assistant professor of hematology and medical oncology at the Winship Cancer Institute of Emory University and a Georgia Cancer Coalition Scholar.

In the laboratory tests, the scientists investigated for a concentration of Withaferin A that does not destroy cells but helps to stop the cells from spreading and migrating to other tissues. Vimentin could be possibly prevented from forming its network within the cell by Withaferin A. The same compound appeared to prevent breast cancer cells from reaching the lung in mice. It was found after examining the compound’s chemically modified versions that a particular region of the molecule seemed to accelerate anti invasive activity and disruption of vimentin.

Way back in 1990s it was found that mice devoid of vimentin developed normally. A protein is generally considered as an essential factor for building a cell, but the research conducted then showed that the absence of vimentin in the mice probably didn’t seem to affect their growth. This brought the scientists to another point that Withaferin A usage was apparently without any toxic side effects. It was suggested that Withaferin A be taken in low doses stretching over time to prevent cancer metastasis. It was recommended that this compound could be taken along with chemotherapy or after the clinical treatments are over.

Withania somnifera was investigated further by comparing the root extract against purified Withaferin A to see if it contained other compounds that could work along with Withaferin A. It would probably be even more beneficial if any compounds were identified independently that could bind vimentin which may have useful properties.

The research is published online in the International Journal of Cancer.