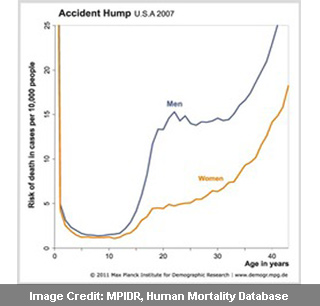 After there were talks of girls attaining puberty at a young age, even the opposite sex seems to be sailing the same boat. As per Max Planck Institute for Demographic Research in Rostock (MPIDR) scientists, the period between biological adulthood and social adulthood is apparently increasing. Boys are seemingly attaining sexual maturity at tender ages itself.

According to the scientists, though adolescents physically attain adulthood, they reach the social and economic aspects of grown-ups in later stages of life. Life cycle research has disclosed that for more than half a century, the age when people marry, have kids and become independent financially and socially is presumably on the rise.

“The reason for earlier maturity for boys, as with girls, is probably because nutrition and disease environments are getting more favourable for it,” commented demographer Joshua Goldstein.

Golstein examined the demographic information linked to mortality. He found that as male hormone is produced at heightened levels during puberty, the chances of death seems to be boosted too. This situation is named as the ‘accident hump’ and is known to be present in almost all places. The scientists uncovered that the highest mortality point of the accident hump supposedly reduced by 2.5 months for every 10 years from the mid-1700s, or in a span of 2 years each century. On similar lines, boys seemed to reach sexual maturity at a young age itself. Most importantly, this age appears to be on the verge of decline owing to the accident hump taking place at an earlier stage. In some cases, the accident hump supposedly occurs in the later stage of puberty when males undergo a voice change and their reproductive abilities step in.

The accident hump is characterized by hazardous and careless behavior that probably puts life at risk. Some examples include high exposure to violent tasks, mightiness and reckless actions that result in accidents. These are touted to be the times when testosterone may be at its peak. Goldstein reveals that the causes of this could be healthy food and improved ability to bounce back to recovery from diseases. He added that these influences look environmental rather than technological as per statistics. The data essentially put forward that males and females have seemingly fared equal in terms of responsiveness to surroundings.

The scientists are not sure if the aforesaid high risk phase may be more hazardous for males as it begins earlier.