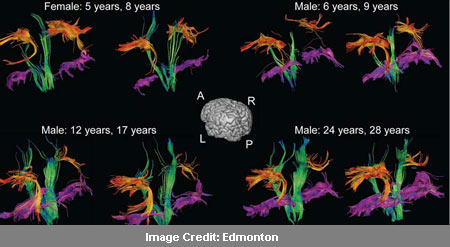 Professionals worldwide believe that the brain stops growing after adolescence. Now, researchers from the University of Alberta have shown that there are some alterations happening in the brain even during young adulthood in our 20s.

The experts observed the brain wiring to reach this conclusion. They used MRIs and scanned the brain of 103 healthy individuals in the age-group 5 to 32. Every subject underwent scanning twice with almost 221 scans cumulatively.

“This is the first long-range study, using a type of imaging that looks at brain wiring, to show that in the white matter there are still structural changes happening during young adulthood. The white matter is the wiring of the brain; it connects different regions to facilitate cognitive abilities. So the connections are strengthening as we age in young adulthood,” commented Catherine Lebel, post-doctoral fellow working with an expert in brain-imaging research.

The outcomes showed that some portions of the brain continue to develop even after adolescence individually. The team found that young adult brains seemed to have ongoing development of wiring in the frontal lobe that is responsible for attributes like inhibitory behavior, hard-core functioning and attention. They believe that it could be due to many reasons like education, independence, onset of a new career and new social or family life.

Another key observation was that in some people, many tracts seemed to display reduced white matter integrity with age, which is usually linked to brain degradation. Also, brain disorders are deemed to occur during adolescence or young adulthood and scientists wished to know if there was a relation between psychiatric issues and brain construct.

According to researcher Christian Beaulieu, if some tracts of the brain begin to degrade too soon, it may not account for the development of psychiatric illnesses during adolescence but may increase one’s vulnerability to these conditions.