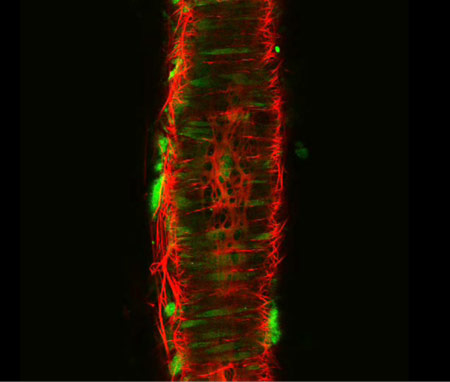 It is observed that as a person grows old, the arteries begin to stiffen. This adds to circulatory complications, and consequently increases the risk of cardiovascular diseases like hypertension, diabetes, and others. A team at the University of Missouri has now identified the structure and organization of the protein which leads to such stiffening of arteries with age.

With the use of advanced 3D microscopic imaging technology, the group identified that gradual rise in the level of collagen is what mainly leads to arterial inflexibility. On the other hand, elastin is a protein which contributes towards maintaining the plasticity of arteries. The production of this protein in the body is at peak levels during youth, while it progressively declines throughout the lifespan.

“A majority of the scientific knowledge of how blood vessels are put together is based on older methodologies that only measured the amount of protein in the artery wall and not how the proteins were architecturally arranged to support artery functions,” believes Gerald Meininger, director of the MU Dalton Cardiovascular Research Center and Margaret Proctor Mulligan Professor of Medical Pharmacology and Physiology. “We used state-of-the-art imaging technology and computer-based models to visualize the minute structural elements within an intact blood vessel and found that one of the proteins, elastin, plays a key role in supporting the ability of the arterial wall to properly function.”

Scientists believe that understanding how to alter the production of elastin to maintain a steady supply when needed can significantly help in decreasing the risk of cardiovascular disorders. This should also aid in improving tissue replacement processes by improving the artificial vascular structures.

This study is titled Spatial Distribution and Mechanical Function of Elastin in Resistance Arteries and has now been published in Arteriosclerosis, Thrombosis, and Vascular Biology, journal of the American Heart Association.