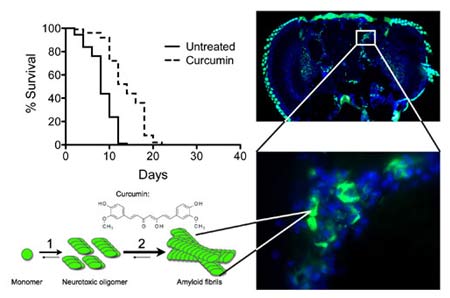 Curcumin is claimed to have a protective effect on tendon diseases like tendinitis and arthritis. Now, experts from the Linköping University have found that turmeric could promote survival and enhance activity of fruit flies suffering from a condition similar to Alzheimer’s.

The fruit fly namely Drosophila melanogaster was used in the research, which is being widely used as a prototype for neurogenerative diseases at present. Five sets of these flies that were subjected to distinct genetic alterations, were infused with a drug containing curcumin. As per the results of the analysis, the lifespan of these flies was seemingly extended by 75% and they sustained their mobility, as compared to ill flies not treated with curcumin.

“The results confirm our belief that it is the oligomers that are most harmful to the nerve cells. We now see that small molecules in an animal model can influence the amyloid form. To our knowledge the encapsulation of oligomers is a new and exciting treatment strategy,” commented Professor Per Hammarstrom, who led the trial.

According to the team, curcumin did not apparently reduce the amyloid plague in the brain or eyes, it worked by increasing the formation of fibers. It seemed to lower the amount of the precursor forms of amyloid known as oligomers. Therefore, the researchers are of the opinion that oligomers are the most detrimental to nerve cells. The findings disclose encapsulation of oligomers as a new treatment strategy for Alzheimer’s disease.

The report titled, ‘Curcumin promotes A-beta fibrillation and reduces neurotoxicity in transgenic Drosophila,’ is published in the journal, PLoS One.