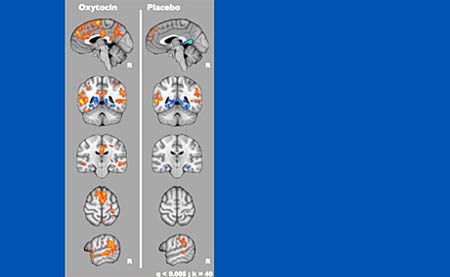 If this trial is validated, we can assume that autism can be beaten right from where it stems. Simply put, scientists from the Yale University have revealed that a substance found in the brain namely, oxytocin could have the potential of improving social function among individuals with autism spectrum disorders (ASDs).

Basically, the aforesaid hormone that is produced naturally in the brain and other parts of the body was found to improve brain function in autistic persons. The beneficial effect was apparently seen in terms of social malfunctions experienced by patients.

“Our findings provide the first, critical steps toward devising more effective treatments for the core social deficits in autism, which may involve a combination of clinical interventions with an administration of oxytocin. Such a treatment approach will fundamentally improve our understanding of autism and its treatment,” commented postdoctoral fellow Ilanit Gordon.

For the study, a set of children aged between 7 and 18 suffering from ASD was examined. These kids were exposed to a dose of oxytocin via a nasal spray. Subsequently, they underwent MRI scanning for the experts to note down their responses to the doses precisely.

According to what was observed, oxytocin appeared to increase the activity in brain regions associated with social functioning. Higher activations in these portions are apparently correlated with improved visual, aural and logical senses.

Autism still does not have an effective form of treatment though cognitive behavioral therapies and technological interventions have shown promise. The study was presented at the International Meeting for Autism Research.