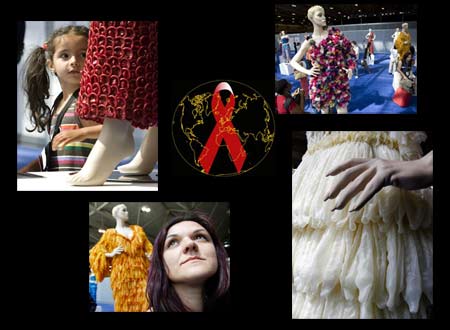 Condoms are very much in style as a fashion accessory at the International AIDS Conference in Toronto and have shown up on normal men, shy teenagers and even African grandmothers. The project has a program that gets people to m,ake their own condom art pin. It all starts with a craft table, packets of condoms, scraps of colored paper, candy and double-sided tape.

“There’s a great need to de-stigmatize condoms around the world, especially in Africa,” said Franck DeRose, executive director of The Condom Project, which aims to get people comfortable about condoms, especially those living in countries where the little piece of latex is considered taboo. DeRose said that creating wearable art out of condoms attracts people who normally wouldn’t wear the prophylactics, let alone touch them or even utter the word.”It opens the door,” said DeRose. “We find that we’re very, very successful.”

Toronto resident Maria Parish, 58, was making hers with a blue condom and blue and yellow paper. “I want something to symbolize the flag of Ukraine,” she said. “I am of Ukrainian descent and AIDS is a global problem.”

People from different cultures and backgrounds wear them, trade them and even argue over safe-sex related topics while making them, including when to broach the subject with kids, DeRose said.

“We’re not pushing it on people. They come to us and the information is there,” said DeRose, adding his group teams up with the local information groups in the communities where his team visits.

“I don’t think it’s healthy or appropriate to change a culture. But we can change the risky behavior within a community.”
DeRose, an artist from Washington, D.C., came up with the idea three years ago while talking about ways to get more people to wear condoms to fight the HIV epidemic. The program has since spread around the world.

Adriana Bertini of Sao Paulo, Brazil, also was making a condom fashion statement. She had plastic mannequins sporting a dress made of orange condoms, a rose-colored mini, a blue harem outfit made of blue condoms, complete with a tight bodice and full-legged trousers.

“The idea is you will see it and think of AIDS,” said Bertini, who says she has been making her condom fashions for 10 years.

Daily Exercise not sufficient to reverse the effects of Sitting