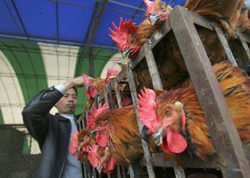 This Tuesday, China reported that the deadly H5N1 strain of bird flu in poultry has resurfaced and this was the second reported case in the last one week. However, the government clarified that the viral outbreak of bird flu, which was spotted in China’s northwest Ningxia Hui Autonomous region last week has so far caused no human infection and has been brought under control.

The newly reported outbreak was confirmed soon after nearly 1000 birds died unexpectedly in a village poultry farm in the Ningxia region. It was confirmed by the national avian influenza lab that the deaths were caused by the H5N1 strain of bird flu.

Immediately, the infected area was quarantined and around 72, 930 birds were culled under the supervision of officials, in order to prevent further spread of the deadly virus.

Besides, Beijing’s city government has also taken steps to ban imports of live poultry and poultry products from the area.

Just last week a similar case of the Bird flu broke out in the neighboring Inner Mongolia Autonomous region. The attack caused the deaths of nearly 985 birds. Nearly 9000 chickens had to be culled.

Analysis has confirmed that China is also the home of the bird flu. This year alone China has reported nine outbreaks of the virus. Health officials fear that the H5N1 strain or its descendant could soon mutate into a form that may spread easily among humans, which could bring the world perilously close to a new flu pandemic.