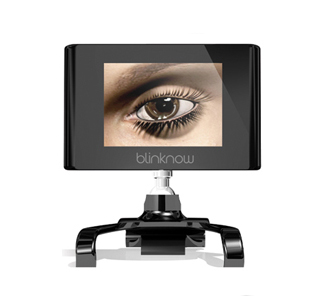 The impact on eye health due to prolonged computer usage may be known to all, but nothing much can be done about it. Well the following invention urges people to blink while working on the computer or VDU screens. The newly introduced Blink now device seems to counter eye strain from computer usage for long hours.

It now appears that just performing regular blinking when in front of the computer can deduct eye strain. Apart from being easily accessible and also effective, the device supposedly stimulates the users in a passive way without distracting the task on the computer. Certain symptoms of computer vision syndrome or screen fatigue are presumably triggered due to reduced blinking while working long hours and focusing on computer screens. Previously conducted investigations have claimed that the blink reflex is decreased when doing computer work.

Experts believe that longer the eye remains open between blinks it’s more likely that the front surface of the eye (cornea) is going to dehydrate. It is known that dehydration of the eye surface results in dry eyes accompanied with a feeling of tiredness, irritation in the eyes and inability to properly focus on near objects after a short duration. The Blink now device may be a visual display apparatus and same size to a webcam. On switching on this device, a blink can be seen at regular intervals, so the user is reminded to blink at a healthy rate. The device can be employed on a long term basis every day and continuously while working at the computer.

Blink now is a unique patented device and will be available by mid November for £49.99.