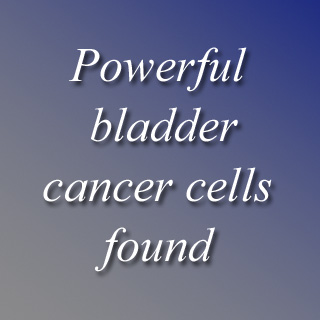 Johns Hopkins scientists have found a powerful set of cells in bladder tumors with the help of a method which obtains benefits from the similarities between tumor and organ growth. Apparently, these cells are chiefly responsible for the development and spread of cancer. The findings of the research may perhaps assist scientists in developing novel methods for finding and attacking similar cells in other types of cancer.

Since previous times, researchers have assumed that a subset of cells in cancerous tumors operate more like developmentally primitive cells known as stem cells. Supposedly, these stem cells stimulate organ development early in life and remain present in about all the body’s organs. Their main function seems to be repairing or replacing wounded and aging tissues.

Cancer cells and stem cells are believed to share a range of characteristics including an unlimited lifespan and a tendency to migrate via tissues. David Berman, M.D., Ph.D., associate professor of pathology, oncology, and urology at the Johns Hopkins University School of Medicine claimed that these identical properties are the ones which make cancer predominantly dangerous.

Berman further stated that other researchers seem to have identified proteins on the surfaces of these cancer cells which could function as indicators. However because other cells occasionally appear to share these proteins, this approach could lead to faults.

This latest research was led by Xiaobing He, Ph.D., postdoctoral research fellow. In this novel analysis, researchers explained that if these stem-like cancer cells act akin healthy stem cells, they may perhaps be located in the same compartments in tissue where stem cells usually reside.

For the purpose of the research, Hopkins team examined sections from approximately 55 human bladder tumors for cells with the same indicator. This, they examined with the help of a surface protein indicator which was earlier identified for healthy bladder stem cells.

They found that cancer cells showing the indicator seemed to have been restricted in an area at the junction of two layers of cells known as epithelium and stroma. Allegedly, this is the place where bladder stem cells are generally located.

Later, researchers separated cells displaying the stem cell indicator from those without it with the help of cancer cell lines developed from other bladder cancer patients. Also, they appear to have injected these two populations into diverse sets of mice.

Subsequently, researchers surveyed both cancer cell populations in order to notice which of their genes were most active. They found that genes with roles that are well-known characteristics of cancer, such as cell proliferation and metastasis, seem to be considerably more active in the stem-like cells in contrast to the other cancer cells. In addition, genes which are known to assist cancers survive chemotherapy and radiation were more active in the stem-like cells.

The findings of the research have been published in the journal Stem Cells.