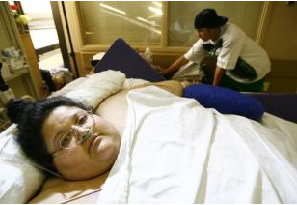 Renee Williams, aged 29, who is apparently the heaviest person to have gastric bypass surgery, at 841 pounds, died of a massive heart attack in Houston, Texas.

Williams had undergone the surgery, which has become a popular treatment for morbid obesity, on Feb. 20 and was thought to be progressing well until she suffered the sudden heart attack on Sunday, the Houston Chronicle reported on Monday.

She lost 67 pounds in two weeks, and doctors said she was doing well however the heart attack came without warning.

“Renee Williams passed away with more hope in her heart than she had experienced in years,” the hospital said in a statement. “Her family and friends are very grateful for the incredible support expressed to Renee from all over the world.”

Over 140,000 gastric bypass surgeries are expected to be performed this year.

The procedure was once scowled upon by mainstream doctors, because it makes the stomach smaller and bypasses part of the small intestine. The result is a patient who feels full more quickly, has less of an appetite and absorbs fewer calories.

The risk is usually small, but it is higher when performed on people with a body mass index between 35 and 60.

William who had a BMI of 137.5 has been heavy her entire life, but after she lost her ability to walk as a result of a car accident in 2005, she gained 450 pounds.

If Williams had survived the surgery, doctors predicted she would lose up to 650 pounds in three years.