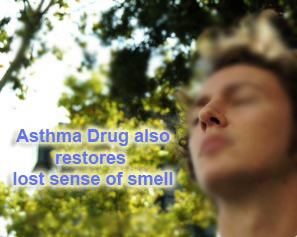 Drugs are getting multi-purpose in nature, asthma patients who suffer from breathing problems will breathe free with an asthma drug and patients with lost sense of smell may also gain improvements from the same drug.

According to a study, a medicine prescribed to asthmatics may help restore the sense of smell among people with “hyposmia”, a reduced ability to detect and recognize odors. Robert Henkin and his colleagues at the Center for Molecular Nutrition and Sensory Disorders in Washington DC say that their study builds on a previous study, which showed that people with hyposmia have low levels of two proteins in the nasal lining called cAMP and cGMP.

The researcher studied 369 people out of which 314 were suffering from hyposmia. They tested various doses of theophylline, a drug used to treat asthma which inhibits the breakdown of cAMP and cGMP. These trials suggested that there was a considerable improvement in the sense of smell of the participants of this test.

It was also noticed that when participants stopped taking the drug, the issue re-occurred and they lost their sense of smell, thus suggesting a regular intake of the drug was necessary. The study was presented at a meeting of the American Physiological Society in San Diego this week