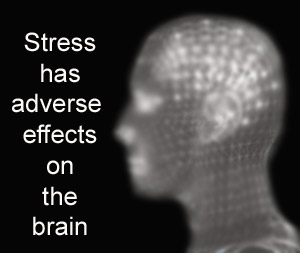 According to the latest research, stress can physically reshape the size of the brain and also cause long-term harm to human beings as well as animals. Stress in the form of emotional, physical or mental tension is very harmful to the over all health of a living being.

Bruce McEwen, a neuroscientist at Rockefeller University, New York, says that, “Stress causes neurons (brain cells) to shrink or grow. The wear and tear on the body from lots of stress changes the nervous system.” Also that stress is “particularly worrying in the developing brain, which appears to be programmed by early stressful experience.”

It is believed that stress in early life, as early as in the womb, can lead to negative changes in the individual’s behavioral pattern and the ability to learn and remember, among other more serious issues.

Tallie Baram, a neurologist at the University of California, Irvine, says that, “Pre-natal stress can change the brain forever. Stress changes how genes are expressed throughout life.” According to her even short term stress is very harmful. She briefs about the experiment they conducted on laboratory mice. They were immobilized for five hours and were exposed to loud rock music. Later an MRI scan of the mice showed that the numbers of delicate fibres that carry signals between neurons were reduced.

She says that this experiment unveiled the reason behind some people’s forgetfulness and also why some people have a tough time recollecting data they had previously retained. She also hoped that some day neuroscientists can produce and supply drugs to counterfeit the damage caused due to stress.

Other researchers believe that chronic stress can physically affect the brain. A study of the children adopted from orphanages revealed that these children suffered from anxiety and also had difficulty controlling their emotions. Brain scans revealed that stress increased activity in the amygdala, the region in the brain which is involved in emotion. Another experiment was conducted on baby monkeys, who were separated from their mother at birth. After a period of two years their brains scan showed that the region in the brain that handles emotions was enlarged. This proves that stress early in life can change the structure of the brain. According to some, it is a sign of stress related neuro-psychiatric disorders in human beings.

Their research was presented at the conference of neuroscientists in Washington.