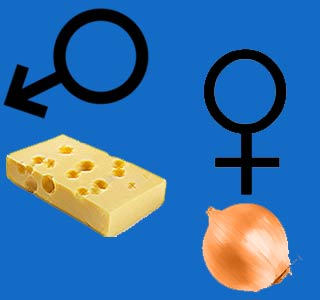 A team of Switzerland scientists have discovered that the differing sexes could have varying body odors. They state that men smell of cheese while women smell of onion! This discovery was made by the scientists from Firmenich, a Geneva company that researchers flavors and perfumes for food and cosmetics companies.

This team of Swiss researchers analyzed the armpit sweat samples of around 24 males and 25 females. Sweat samples were taken from these men and women after they had gone to the sauna or had ridden an exercise bike for about 15 minutes. The obtained results showed a significant difference in the sweat acquired from both men and women.

When the compound from women’s sweat was introduced with a type of common armpit bacteria, it was discovered that the produced odor was similar to an onion. While the odor obtained from men turned into a cheesy odor on being exposed to the same type of armpit bacteria.

These findings could prove to be very resourceful for better understanding human body odor; which could in turn aid in the development of appropriate deodorants specially designed to overcome this smelly criterion. However not all agree to these findings. They reason that body odor could vary from differing people depending on their diet and various other factors.

Their findings are published in Chemical Senses.