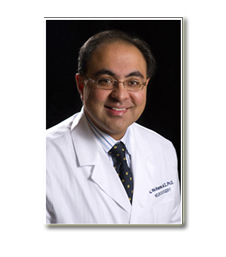 An Indian-born Australian doctor Vini Gautam Khurana and his team at Canberra Hospital have performed the world’s first awake brain keyhole surgery to remove a life-threatening aneurysm or a large blister from a patient’s brain.

‘We believe it is the first time that this kind of aneurysm and malformation have been shut down through a keyhole approach in an awake patient assisted by cutting-edge technology,’ said Khurana who is a staff specialist neurosurgeon at the Canberra Hospital and Associate Professor of Neurosurgery for Australian National University Medical School.

This operation was conducted on a 77-year-old man suffering malformation in a major vein in his brain, behind his right eye, that was impairing his vision.

Khuranahad said that the keyhole surgery, performed through a 1.5cm hole drilled into the patient’s skull with the patient comfortably awake during the critical parts of the surgery, was so successful that the patient was able to leave the hospital within a few days with a marked improvement in his vision.

‘We had rehearsed the surgical approach using specialist imaging software to understand the anatomy of the malformation and their relationship to the skull base,’ said Khurana.

US-trained Khurana had migrated to Australia in 1973. He belongs to a family of doctors. Both his parents were doctors and his brother is a Fulbright scholar at Harvard studying Neurology.

‘I was two-and-half years old, when we migrated to Australia, but our roots are very much Indian and we have strong links back home. I am looking forward to more interaction with premier Indian hospitals like the All India Institute of Medical Sciences (AIIMS) in New Delhi. My parents were trained at AIIMS’.

‘We have started an Awake Brain Surgery Programme for high risk vascular and tumour conditions of the brain following the success of the surgery,’ said Khurana,
‘We have also applied for permission to conduct surgery and teach at the Saibaba Charitable hospital in Bangalore’, said Khurana,