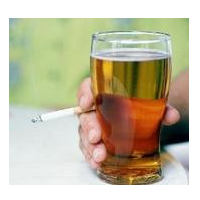 Researchers at the University of Alabama in Birmingham say that drinking alcohol while present in tobacco smoke-filled air is bad for cardiovascular health.

Lead author Scott Ballinger exposed mice to smoky air in a laboratory enclosure and fed them a liquid diet containing ethanol — the intoxicating ingredient in alcohol.

The mice exposed to smoke and alcohol had a an almost five-fold increase in artery lesions, compared to mice that breathed filtered air and ate a normal solid diet.

The study, published in the journal Free Radical Biology & Medicine, shows that exposure to cigarette smoke when combined with alcohol consumption caused the greatest degree of cardiovascular disease development compared to either action or exposure alone.

Blood-alcohol concentrations in the mice were equivalent to a 150-pound adult consuming two drinks per hour. Cigarette smoke exposure was similar to being in an automobile with a chain smoker with the windows closed.