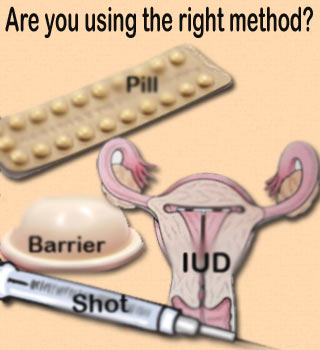 Birth control pills, shots, barriers, how up front are you about your contraceptive methods? Well the reason we are asking is many women are in fact not updated about the availability of various contraceptive options. At least that’s what a new survey reveals. A Scottish survey shows that many women may not be getting the best form of contraception because of myths like weight-gain and peer pressure associated with the use of contraceptives.

Yes contraceptive methods have sure come along way, however the latest survey suggest that women may not be opting for the best type of contraception because they have many false fears and myths.

Professor Anna Glasier, from Sexual Health NHS Lothian, remarked, “We are shooting ourselves in the foot by saying they are long-acting, and we need to emphasize that they don’t impair fertility, and the majority of them don’t affect weight. Doctors tend to focus on medical problems, whereas women are actually more worried about their weight, their skin and their chances of being able to have children in the future.”

Sexual health specialist in southern Scotland conducted the survey on nearly 55 women. The poll showed that while many women may not prefer long-acting hormonal contraception as they fear weight gain, most of the women rejected the coil and implants because they hate undergoing examinations by doctors as well as invasive procedures. A few others simply chose the Pill because they wanted to follow their peers.

The Department of Health and Scottish authorities advise women to go in for long-acting contraceptives as they are much more reliable and have fewer side effects. They have even set guidelines that indicate doctors to offer women long term contraceptives when they ask them for contraception.

Experts however reveal that it may be difficult to convince women about such contraceptive methods because of the fears. According to a new research, only one in 10 women used these contraceptives in the past year. The figure is less than one fourth the number using either oral contraceptives or condoms. Researchers believe that most women are actually scared of long acting contraceptives because they fear it could harm their fertility and even make them gain weight.

In addition the survey reveals that methods like intrauterine devices and coils were dismissed by women because it would be inserted by a doctor. Some of the women were freaked out by simply the idea of getting an implant.

In short, the survey reveals that there are two main reasons why women are put off by particular methods of contraception- one being unnecessary fears that it would harm their long term fertility and the second being weight gain.