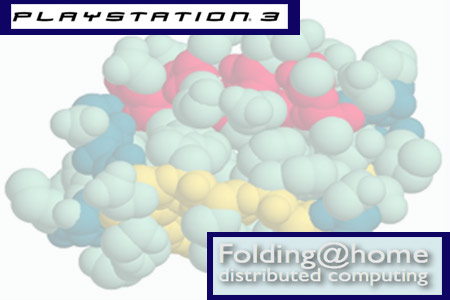 Sony Computer Entertainment has announced that, since PLAYSTATION 3 participated in Stanford University’s ‘[email protected]’ project on the 22nd of March last year, the total number of registered users has reached over one million users. This approximately amounts to 3,000 PS3 users registering for the project per day or 2 new users every minute worldwide.

The ‘[email protected]’ project aims to educate people on the subject of protein folding and misfolding, also how these processes are related to diseases and many forms of cancer. Studies show that when proteins do not fold correctly, there can be serious consequences, including many well-known diseases, such as Alzheimer’s, Huntington’s, Parkinson’s disease, and many cancers and cancer-related syndromes.

Vijay Pande, Associate Professor of Chemistry at Stanford University and [email protected] project lead said that since partnering with SCEI, they have seen their research capabilities increase by leaps and bounds due to the continued participation of [email protected] users.

He added “Now we have over one million PS3 users registered for [email protected], allowing us to address questions previously considered impossible to tackle computationally, with the goal of finding cures to some of the world’s most life-threatening diseases. We are grateful for the extraordinary worldwide participation by PS3 and PC users around the globe.”

Prior to the introduction of PS3, the [email protected] project controlled the distributed computing power of personal computers around the world. Currently a network of about 10,000 PS3s achieves the same amount of work as a network of 100,000 PCs.

Its also has the ability to perform research simulations in weeks rather than years. In fact, it took just six months after PS3 joining [email protected]ome for the project to exceed a petaflopsa which is the ability of a computer to do one quadrillion floating point operations per second (FLOPS). This computing milestone unreachable by a distributed computing network.

On September 16, 2007, ‘[email protected]’ was acknowledged by Guinness World Records as the world’s most powerful distributed computing network. Currently PS3 users make up approximately 74 percent of the total teraflop computing power of the [email protected] project.