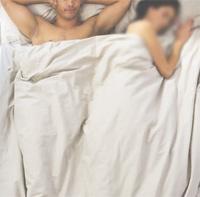 Anybody would be irritable after they fail to get good sleep at night. However, research has found that out of the two sexes, it is women who are grumpier after a bad night. Further, researchers have also found that poor sleep also affects women’s overall health more seriously than in men.

Boffins at Duke University in North Carolina said that a bad night’s sleep could increase the risk of diabetes, strokes and heart attacks.

The researchers based their findings on a study that involved 210 male and female volunteers without sleep disorders.

40 percent of the volunteers however, were classed as poor sleepers after they filled in a questionnaire.

During the course of the study, researchers took blood samples and analyzed the volunteers psychological condition.

They found that women who didn’t get good nights sleep were more likely to be angry, depressed and suffer from other disorders than men.

“For women, poor sleep is associated with high levels of psychological distress, and feelings of hostility, depression and anger. These feelings were not associated with the same degree of sleep disruption in men,” Dr. Edward Suarez, an associate professor of psychiatry and behavioral sciences said.

They also noted that not getting enough sleep increased levels of insulin and glucose in women. These are linked to an increased risk of Type 2 diabetes and heart disease.

Higher levels of fibrinogen, a clotting agent linked to stroke, was also noted in women who lacked sleep.