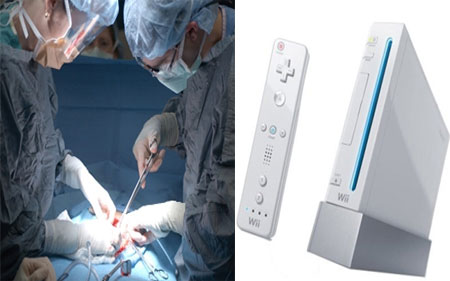 Some time ago, we had reported that playing casual games could help reduce your stress levels and action video games have the power to improve one’s eye sight. Now, a US research has concluded that Nintendo’s next-generation shiny white Wii console can indeed help develop and enhance one’s surgical skills.

The study concluded that the Wii console’s motion-sensing control mechanism could assist trainee surgeons in learning some very specific physical movements that are needed when conducting complex surgical procedures.

The research showed a common trend for surgeons who warmed up by playing video games on the Wii before a surgery. It was noticed that those who played such games beat other surgeons who did not actually play the console by 48% in the categories of tool control and performance.

According to Dr. Kohel of Banner Good Samaritan Medical Centre who spoke to New Scientist magazine, “The whole point about surgery is to execute small, finely controlled movement with your hands, and that is exactly what you get playing. But you don’t gain a lot from swinging an imaginary tennis racket.”

On the basis of these results, US doctors are now designing special software meant for their colleagues. They hope that this software will assist surgeons in conducting a virtual surgery using the Wii’s control system.