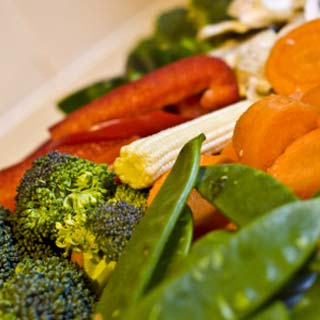 The debate on fruits and vegetables’ protective traits against cancer seems to be an unresolved one. More recently, scientists from the Western Australia Institute for Medical Research have revealed that the influence of fruits and vegetables on colorectal cancer (CRC) seemingly varies with the site of source.

As far as tumors within the proximal and distal colon are concerned, brassica vegetables like brussels, sprouts, cabbage, cauliflower and broccoli may be related to lower risk for these cancers. Distal colon cancer may be reduced by consuming more apples, but the rectal cancer risk appeared to elevate by drinking fruit juice.

“Fruits and vegetables have been examined extensively in nutritional research in relation to CRC, however, their protective effect has been subject to debate, possibly because of different effects on different subsites of the large bowel. It may be that some of the confusion about the relationship between diet and cancer risk is due to the fact that previous studies did not take site of the CRC into account. The replication of these findings in large prospective studies may help determine whether a higher intake of vegetables is a means for reducing the risk of distal CRC,” specified lead investigator Professor Lin Fritschi, PhD, head of the Epidemiology Group at WAIMR.

The analysts examined the association between fruit and vegetables for 3 cancers namely proximal colon cancer, distal colon cancer and rectal cancer. The study constituted 918 participants who were suffering from colorectal cancer and 1021 individuals were in the control group with no past CRC. They underwent detailed medical and nutritional surveys with an assigned socio-economic status related to their residential address.

As per the outcomes, consuming pure fruits and vegetables was touted to reduce distal colon cancer. Also, the latter was significantly reduced by consumption of dark leafy vegetables and apples. Proximal colon cancer and rectal cancer were presumably not linked to total fruit and vegetable intakes.

The varied influences of dietary components on different locations of the large bowel have not been disclosed as yet. The report is published in the Journal of the American Dietetic Association.