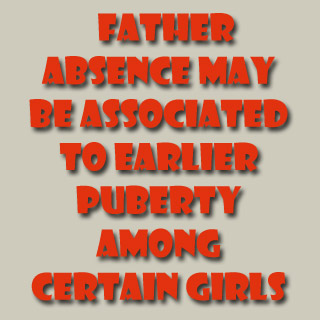 The absence of a biological father seems to play a crucial in role in the development of a girl. A groundbreaking study led by the University of California, Berkeley’s School of Public Health claims that girls in homes without a biological father are more likely to hit puberty at an earlier age. It was discovered that breast and pubic hair development was early in girls from higher income households with no biological father. Even after considering the girls’ weight, findings apparently continued to remain the same.

The authors apparently associate early puberty to greater risk for breast and other reproductive cancers in later life. Though prior investigations have highlighted this link, this analysis is probably the first to consider body mass index, ethnicity and income and not just the girls’ first periods. During the study, experts analyzed 444 girls aged 6-8 years through Kaiser Permanente Northern California, and have been following them every year. The study was based on the first two years of follow-up. Scientists kept a tab on signs of puberty known to occur before the start of menarche. While interviewing the girls’ caregivers, questions regarding residents in the girls’ homes and their relationships to the children were asked.

Julianna Deardorff, UC Berkeley assistant professor of maternal and child health study lead author, alleged, “The age at which girls are reaching puberty has been trending downward in recent decades, but much of the attention has focused on increased body weight as the primary culprit. While overweight and obesity alter the timing of girls’ puberty, those factors don’t explain all of the variance in pubertal timing. The results from our study suggest that familial and contextual factors – independent of body mass index – have an important effect on girls’ pubertal timing.”

The outcome of the study was that 80 registered absence of biological father at the time of recruitment. Authors seemingly linked absence of a biological father to earlier breast development for girls in higher income families. It was noted that those having annual household incomes of $50,000 or more were considered high income families. In higher income African Americans families father not being present presumably predicted earlier onset of pubic hair development. Though the exact mechanism behind this link is apparently unknown, it is suspected that absence of a biological father may signal an unstable family environment, leading girls to enter early puberty.

If we consider another theory, it says that early puberty in such girls is because of exposure to more unrelated adult males, particularly, the pheromones of these males. Investigators enlighten that the presence of other adult males, including stepfathers in the home did not modify the findings of the current study. The scientists were even unable to gauge why father absence predicted early puberty only in higher income families, especially for African American girls.

Deardorff added, “It’s possible that in lower income families, it is more normative to rely upon a strong network of alternative caregivers. A more controversial hypothesis is that higher income families without fathers are more likely to have a single mother who works long hours and is not as available for caregiving. Recent studies have suggested that weak maternal bonding is a risk factor for early puberty.”

It may even be such that higher income girls in father-absent homes are exposed to more artificial light like television, computers and other forms of technology that are known to fasten puberty in animal studies. There is also a possibility that higher income African American girls are able to use certain beauty products like hair straighteners, which have estrogenic properties that could influence pubertal timing. A study initiated on 1,200 girls in the month of August claimed that 15 percent of the girls show breast development at age 7. It can therefore be concluded that though unclear, the reason for early puberty seems to be complicated.

The study was published on September 17 in the Journal of Adolescent Health.