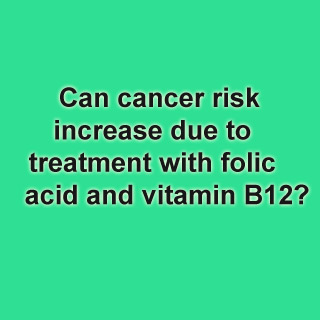 This news carries a strange but shocking revelation. A study claims that patients suffering from heart disease in Norway, a country with no fortification of foods with folic acid, apparently had a related augmented danger of cancer and death from any cause if they were given any treatment containing folic acid and vitamin B12.

Supposedly nearly every epidemiological study has discovered opposite connections between folate i.e. a B vitamin intake and danger of colorectal cancer, even though such relations have apparently been inconsistent or missing for other cancers.

The authors commented, “Experimental evidence suggests that folate deficiency may promote initial stages of carcinogenesis, whereas high doses of folic acid may enhance growth of cancer cells. Since 1998, many countries, including the United States, have implemented mandatory folic acid fortification of flour and grain products to reduce the risk of neural-tube birth defects. Recently, concerns have emerged about the safety of folic acid, in particular with respect to cancer risk.”

The two clinical trials comprised of about 6,837 patients with ischemic heart disease who were treated with B vitamins or placebo between 1998 and 2005, and were followed up through December 31, 2007. Around 1,708 patients were randomly divided to be given oral treatment with folic acid around 0.8 mg/d, plus vitamin B12 about 0.4 mg/d, in addition to vitamin B6 about 40 mg/d. Around 1,703 patients were given 0.8 mg/d folic acid plus 0.4 mg/d. About 1,705 patients were given vitamin B6 alone. The amount of people in the placebo group was about 1,721. During study treatment, median serum folate concentration apparently augmented more than 6 times among subjects given folic acid.

The authors remarked, “Results were mainly driven by increased lung cancer incidence in participants who received folic acid plus vitamin B12. Vitamin B6 treatment was not associated with any significant effects.”

The authors concluded by mentioning that their results need confirmation in other populations and underline the call for safety monitoring following the widespread consumption of folic acid from dietary supplements and fortified foods.