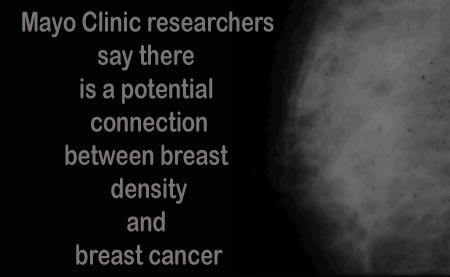 Dense breasts, areas that show up light on a mammogram, are linked to an increased vulnerability to breast cancer. However, the reason for this is yet to be discovered. Mayo Clinic researchers have uncovered various potential links, by analyzing dense and non-dense tissues from the breast of healthy volunteers.

Simultaneously two studies were presented in poster form. The first study stated that more cells reside in a dense breast tissue as compared to the non-dense tissue, which in turn, apparently, gives birth to breast cancer. This study is led by Karthik Ghosh, M.D., breast cancer researcher and physician, Mayo Clinic. The second study stated that dense breast tissue, as compared to non-dense tissue, have more aromatase enzymes. The study’s lead investigator, Celine Vachon, Ph.D., says that, estrogen is very crucial in the development of breast cancer, and aromatase aids in the transformation of the androgen hormones into estrogen.

Dr. Vachon further says, “If aromatase is differentially expressed in dense and non-dense breast tissue, this could provide one mechanism by which density may increase breast cancer risk.” Dr. Ghosh says the study of healthy women is very crucial in better understanding the role of breast density in the development of breast cancer. He says most of the earlier studies on breast density had taken into consideration the tissues obtained from breast disease affected women. The study researchers say that this study is very exclusive because it has taken into consideration both the dense as well as non-dense tissues from the same healthy breast in healthy volunteers.

The researchers took eight core-needle biopsies from the breasts of around sixty women, aged from 40 to 85. None of these had a history of breast cancer. Dr. Ghosh’s team analyzed the biopsies to verify the amount of stroma (the connective tissue that aids the epithelial cells), epithelium tissue (primarily composes of milk glands and ductal cells) and the fat content in each. Dr. Ghosh says that, “This shows us that both the epithelium and stroma contribute to density, and suggests that the large difference in stroma content in dense breast tissue may play a significant role in breast cancer risk.”