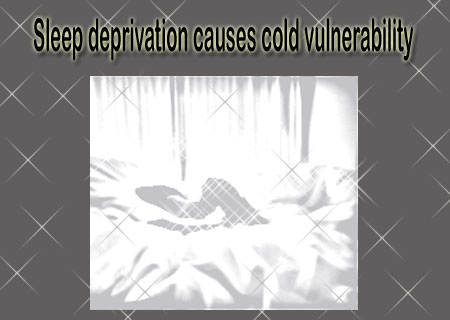 The positive effects of good sleep and negative effects of less sleep are very well known. A recent study has confirmed a lesser known ill effect of inadequate sleep. They say that getting lesser than seven hours of sleep preceding cold exposure, may lead to respiratory illness.

Apparently,not much is known about the link between effects of less sleep and a person’s vulnerability to common cold. This study was conducted by Sheldon Cohen, Ph.D., Carnegie Mellon University, Pittsburgh; and his colleagues.

More than 150 healthy subjects were evaluated for this study. These averagely aged 37 subjects were questioned daily for a period of two weeks. They had to report the number of hours they slept every day, the percentage of their time spent in bed sleeping, and also if they felt rested and were not fatigued.

The results revealed that those who slept lesser were more susceptible to acquire common cold. It is even said that low sleep efficiency was linked to cold vulnerability. On the contrary, feeling rested was not linked with catching cold.

“What mechanisms might link sleep to cold susceptibility? When the components of clinical illness (infection and signs or symptoms) were examined separately, sleep efficiency but not sleep duration was associated with signs and symptoms of illness. However, neither was associated with infection.” They further say, “A possible explanation for this finding is that sleep disturbance influences the regulation of pro-inflammatory cytokines, histamines and other symptom mediators that are released in response to infection.”

Sleep deprivation has adverse effects on the immune system. The authors state that people sleeping for about seven hours every night, rarely experience cardiovascular related diseases and death.

The authors recommend at least seven hours of sleep per night. That’s not too much to ask in return for a healthier mind and body, right?

Their study findings are published in one of JAMA/Archives journals, the Archives of Internal Medicine.