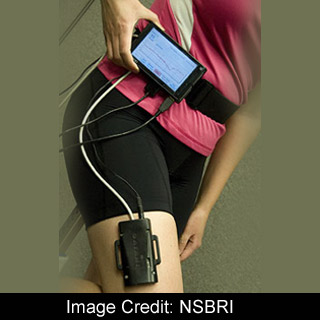 A team of scientists have come up with an innovative system which may be useful in Space as well as on the Earth. This system was created with the aim of developing a sensor for NASA astronauts to measure their metabolic rate, blood and tissue chemistry, along with other parameters. This creation was made by Dr. Babs Soller and her colleagues from the National Space Biomedical Research Institute (NSBRI).

Soller says that, “Tissue and blood chemistry measurements can be used in medical care to assess patients with traumatic injuries and those at risk for cardiovascular collapse. The measurement of metabolic rate will let astronauts know how quickly they are using up the oxygen in their life-support backpacks. If spacewalking astronauts run low on oxygen, the situation can become fatal.”

This four-inch by two-inch sensor is said to take measurements without the use of excruciating needles to draw blood. It has been stated that the system’s infrared light may partly be absorbed by the blood in tiny blood vessels, whereas the rest of it gets reflected back to the sensor. This reflected light is in turn evaluated by the monitor to verify the tissue oxygen, pH and metabolic rate.

As mentioned earlier this device may be used by people on Earth as well. Nonetheless the scientists have said that this system may prove to be beneficial to health authorities on ambulance as well as for injured soldiers on the battleground. Apart from this, even physical therapy patients and athletes are believed to gain from this technology.

The scientists have concluded by stating that at present they are attempting to reduce the size of this system for the purpose of incorporating them into spacesuits. They are even trying to make this system capable of running on batteries apart from trying to increase its accuracy in taking measurements.