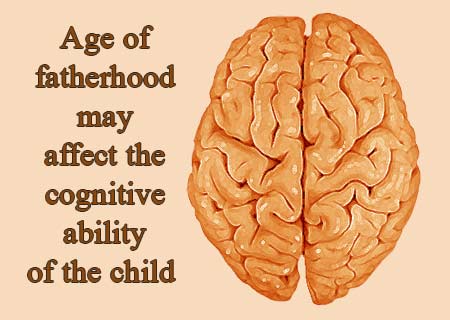 According to a latest study, children born to older men don’t perform as well on cognitive tests during infancy and early childhood. Quite contrary to this, it was also found that children born to older women possibly performed better in similar tests. This study was conducted by the University of Queensland.

The present study has attempted to analyze the association between paternal age and their child’s cognitive capabilities. The data for this study was drawn from the US Collaborative Perinatal Project, which was conducted on more than 33,000 children. In a re-analysis of this accumulated data, the present study investigators took into consideration various socio-economic factors.

Lead study author, John McGrath, Queensland Brain Institute, University of Queensland, Australia, and colleagues discovered that the higher the age of the father, the more likely were the chances of the child to score lesser on certain tests. On the contrary it was also found that the children of older mothers performed better in these cognitive tests.

Certain assumptions have been made to explain the connection between the father’s age and the cognitive ability of the child. It was suggested that older men, due to their age, were more likely to produce sperms that had a higher risk of being mutated. This could then pass on to their offspring and thus result in certain health complications.

The investigators recommend policy makers to promote an awareness of the possible risks that may be faced by children; which has been associated with older fatherhood by this study.

Their findings are published in the PLoS Medicine journal.