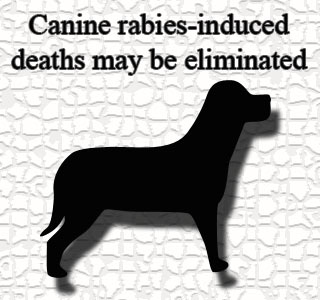 It is estimated that in every ten minutes some one or the other succumbs to death induced by a bite from a dog with rabies. This estimation holds true for certain developing regions of the world, mainly in rural Africa. Now a latest study has raised the hopes of people for the global eradication of this terrifying disease. This study was conducted by the McMaster University, Britain and the United States.

Rabies is a viral disease which causes acute encephalitis in animals. This disease spreads through the saliva of the infected animals. It is stated that this disease annually causes more than 24,000 deaths in Africa. This disease mostly takes place in children.

With the aim of globally eliminating this disease, the study investigators brought forward their analysis of rabies transmission in two particular districts of rural Tanzania. Their accumulated data states that the global elimination of rabies may actually be possible.

Jonathan Dushoff, an assistant professor of biology, McMaster University, says that, “If it really is a disease that can be eliminated, our group believes we should go and get it. This paper is one step along the route of trying to figure out whether canine rabies is controllable, how it can best be controlled and promoting the idea it’s a disease we can eliminate.”

Through an analysis of rabies outbreak in various other parts of the world, it was again found that the transmission of canine rabies was inherently quite low. Thus it is stated that controlled efforts on the part of the developed countries could gain success over this terrifying disease. They say that vaccinating more than half of the canines in Africa could be done cost-effectively, through yearly vaccination campaigns.

Following the success of their present study, the investigators plan to conduct an even larger study.

Their findings are present in the PLoS Biology issue.

Study sheds light on parental misperception of the accurate weight of...