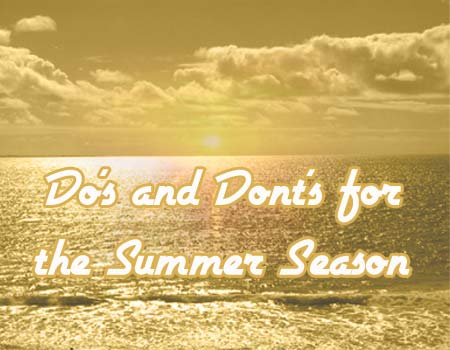 The soaring heat is the sign of the approaching nasty summer season that arrives with its sunny shine. There must be a variety of things that you may have noted on your summer vacation’s to-do-list. As the summer season gets closer, many people may impart innumerable suggestions and recommendations on the do’s and don’ts of keeping yourself healthy and safe from excessive sun exposure. However, not all are always consciously aware of following certain mandatory rules which will ensure that their health may not be jeopardized during this season.

This summer let’s get ready to embrace summer with all its glory. For this purpose, our HealthJockey team has accumulated and reported of certain do’s and don’ts for the approaching seasonal month of summer. We have thought of presenting this to our readers with the hope of aiding and guiding them to maintain their over all health and fitness and stay away from acquiring avoidable-diseases.

People usually enjoy the warmth of this season by indulging in their favorite out-door hobbies. While exposure to the sun may be useful to the body to a certain extent, it’s over exposure could have the exact opposite result. In order to deal with the heat during summer, the body’s natural cooling mechanism takes over and causes perspiration. However, at times it may not be able to do so effectively, so an individual has to adopt certain means through which they can prevent their body temperature from rising. Out of the various alternatives of doing so, one easy way of keeping your body cool would be to drink plenty of water.

On an average 70 percent of the human body is said to mainly be composed of water, while the remaining part consists of about 30 percent solid matter. Thus, a person has to keep oneself well hydrated and nourished throughout the year. However, these basic facts hold a deeper meaning when referring to the seasonal month of summer. During this season, people should try to consume fluids like fresh fruit juices, soups, coconut water, etc. Apart from staying well hydrated, adequate water consumption is also said to be helpful in clearing toxins from the body, keeping the organs healthy, and revitalizing the skin texture.

If we are not wrong, the seasonal month of summer could even be called the most-awaited month of the year! Throughout the year this month is looked forward to, so that everyone can show off their well toned and well tanned body. This is believed to be a season where people get a chance to flaunt their healthy glow and tan.

But excessive exposing of oneself to the sun could lead to various skin complications like sunburns, premature aging of the skin, peeling skin, dark patches on the skin, etc. Do not fret, this does not mean that you won’t be able to enjoy the summer’s warmth. However there are certain factors which have to be kept in mind so that it may be possible for you to enjoy the warm sunlight without damaging your body.

Before we let you in on the things to avoid doing during the month of summer, we would like to list out the things that you could indulge in. Looking at the positive side first, let’s view the list of things that could be followed to perhaps help you in shielding yourself and your dear ones from the harmful rays of the sun.

Suggested do’s for the summer season:

1.) Shield your eyes and face by wearing sun glasses and a broad brimmed hat. This will help in protecting your face and neck from directly being exposed to the UVA and UVB rays of the sun.

2.) Regularly apply sunscreen and moisturizers to protect your skin from the harmful rays of the sun. Now you may be wondering that, which sunscreen would be more apt for this weather- the one claiming to have SPF 15 or the one with SPF 30? Let us make this situation a little easier and less confusing for you with the help of a research conducted by a well known university. According to them, SPF or Sun Protection Factor indicates the amount of the sunscreen’s ability to absorb the sun’s burning rays. In answer to the above question we would like to bring forth the research findings which stated that SPF 15 is believed to be capable of absorbing about 93 percent of the sun rays, while SPF 30 apparently absorbs about 97 percent of the sun rays. This piece of information must have helped all you people out there to get a better idea of how to get that healthy glow in a healthy way!

3.) The Brihanmumbai Municipal Corporation (India) has issued an advisory indicating various precautionary measures like not working in a hot environment, drinking plenty of fluids, reducing the consumption of road-side foodstuffs and beverages, wearing loose-fitted clothing, etc. among others.

4.) Since there is an increase in the number of allergens during summer, there is an added requirement for adequate nourishment of the body during this time. The body can be nourished by consuming a healthy and balanced meal. This may in turn ensure that adequate amounts of good supplements like minerals, zinc, vitamins, carotenoids, etc. are provided to the body, which helps in strengthening the immune system and fights against these allergens.

5.) In addition to using sunscreens, another technique of protecting oneself from sunburns was suggested to be an adequate consumption of tomatoes. A research conducted by a renowned university has stated that adding about 5 tablespoons of tomato paste to the daily diet could perhaps aid the skin in protecting oneself from the harmful ultraviolet rays. They have revealed that although the consumption of tomatoes won’t guarantee complete protection from the sun, they may lend a helping hand to shades, sunscreens and clothing from protecting an individual from sunburns. Other than tomatoes, the intake of healthy foodstuffs like green leafy vegetables, fruits etc. are also advisable for the aim of maintaining a healthy body. Drinking the juices of fruits like grapes, watermelon, lemon, banana etc. may be useful in keeping one’s body cool during this increasing heat.

Suggested don’ts for the summer season:

1.) Avoid coming in direct contact with the sun when its rays are the sharpest, i.e. during the afternoon time. Elude yourself from leaving the house without shielding yourself adequately through various means, from the damaging rays of the sun.

2.) Although the consumption of junk food should be kept to a minimum throughout the year, it holds a deeper meaning during the seasonal month of summer.

3.) Food should be consumed immediately after cooking it. Due to the hot weather, leaving cooked food out in the open for an elongated period of time could possibly result in illnesses in children.

4.) Avoid an over consumption of unhealthy foodstuffs containing fats, spices and sugar. Along with this, also avoid the consumption of carbonated drinks, as they contain preservatives, added flavors and colors.

5.) Limit the usage of beauty products and cosmetics during the hot weather of summer. Since the skin is more likely to perspire during this season, increased use of such products may create a hurdle and curb the skin from breathing efficiently. Due to this, the skin cells may get deoxygenated and may also give rise to acne.

This brings us to the end of this feature article. We hope that you have enjoyed reading this article as much as we have enjoyed presenting it to you. We would also like to believe that our readers must have taken notice of the above mentioned pointers for keeping themselves well protected and safe; both internally as well as externally during summer.

Before leaving we would again like to warn our readers to be “sun smart”, hydrated, and cool in this hot weather of summer. Also we would like to recommend you to consult your family physician before adopting and implementing any of the measures mentioned above.