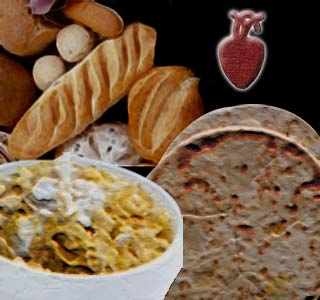 High carbohydrate foodstuffs like white bread and cornflakes were presumably known to be harmful to the heart. However now a latest research has shed light on the process of precisely how these high carbohydrate foodstuffs may cause damage to the cardiovascular health. This milestone research was conducted by Dr. Michael Shechter of Tel Aviv University’s Sackler School of Medicine and the Heart Institute of Sheba Medical Center, in collaboration with the Endocrinology Institute.

These experts were believed to have observed the effects of having foodstuffs which may not be right for a healthy heart. For this purpose they evidently looked within the arteries of young adults who were consuming an array of foodstuffs. It was seemingly observed that high glycemic index food products may possibly inflate the brachial arteries for quite some time, following their consumption.

It was noted that the flexibility or elasticity of arteries throughout the body may be an indication of a good heart health. However due to numerous factors taking place over a long period of time, there may be an expansion of the artery wall, which could in turn lead to various adverse health effects. The observed causal effects may also include lowered elasticity which could in turn be detrimental in facing heart diseases or may possibly even seem to be fatal.

Through a unique mechanism developed by Dr. Shechter’s team, these experts apparently succeeded in witnessing the changes taking place in human arteries before, during and after consuming foodstuffs highly laden with carbohydrates.

Dr. Shechter says that, “It’s very hard to predict heart disease. But doctors know that high glycemic foods rapidly increase blood sugar. Those who binge on these foods have a greater chance of sudden death from heart attack. Our research connects the dots, showing the link between diet and what’s happening in real time in the arteries.”

For the purpose of this research, an analysis was conducted on more than 50 healthy subjects, which were further divided into four groups. Each of these groups was either given a pure sugar mixture, cornflake mush with milk, bran flakes or placebo (water).

After a period of one month, all the participants were believed to have been subject to the “brachial reactive testing” technique. The experts were evidently astounded with their discovery. It was observed that prior to eating anything; all the subjects seemed to have similar arterial function. However after eating, all the groups except the placebo group were noted to have a reduced functioning. Apparently this adverse effect was found in the group of subjects consuming high glycemic index foodstuffs like the groups having cornflakes and sugar.

“We knew high glycemic foods were bad for the heart. Now we have a mechanism that shows how,” explains Dr. Shechter. “Foods like cornflakes, white bread, french fries, and sweetened soda all put undue stress on our arteries. We’ve explained for the first time how high glycemic carbs can affect the progression of heart disease.”

In order to avoid such an effect on the health, experts believe that the consumption of low glycemic index foodstuffs may be useful. Foodstuffs like fruits, vegetables, legumes, oatmeal, nuts, etc. are stated to possibly be beneficial to one’s health. Apart from this, regular physical activity may have an added advantage for enhancing ones cardiovascular health.

These findings were presented in the Journal of the American College of Cardiology.