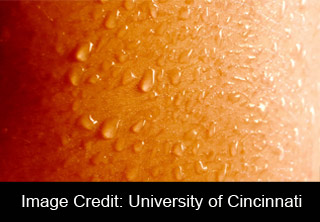 It is normal for people to perspire or sweat in high temperatures, while exercising or doing other exerting activities. However, the quality of life of those people may be affected who constantly experience profuse sweating. This observation was made by the investigators from the University of Cincinnati (UC).

Perspiring or sweating is noted to be a natural involuntary process which is managed by the sympathetic nervous system. The sympathetic nervous system is believed to have been designed in such a way so that it can manage the human body temperature and clear the body of toxins. However some people who experience excessive sweating may be suffering from a condition called hyperhidrosis. It has been estimated that almost 3% of people in the US may be suffering from this condition, which is characterized by excessive perspiration in generalized or localized parts of the body; often affecting the sweat glands on the palms, soles of the feet or underarms.

“Everyone sweats, but there are some people at the extreme end of the spectrum that sweat so much it seriously impairs their lifestyle. Sweating is more important to people when they become more socially active and enter the workforce. For someone with hyperhidrosis, even shaking hands can become an awkward situation,” says Michael Reed, MD, thoracic surgeon with UC Physicians and University Hospital.

Severe cases of hyperhidrosis, if not treated, may seriously affect the patient’s quality of life and ability to effectively perform their job. Apart from affecting one’s ability to do their job, it can also affect their ability to perform simple tasks like holding a pen, steering a wheel to drive, etc.

Often this condition may be treated with over-the-counter antiperspirants and dry rubs or with prescription medications. However, patients with severe cases which also include palm sweating may have to undergo surgery for a permanent cure. The endoscopic transthoracic sympathectomy (ETS) is believed to involve a surgery which requires making small incisions under the arms, where specialized tools are inserted to clip the nerve that controls hand sweating. This procedure is believed to be applicable to only a select few patients with hyperhidrosis. It is believed that this procedure may only be undergone as the last option by patients.

According to Reed there are a few factors which could be of help in determining the right candidates for this procedure. These factors include the exhaustion of other alternative options for treating this condition, the patient’s motivation for conducting this surgery, and accepting and understanding the various kinds of side effects which may be accompanied with this procedure.

Following the clipping of the nerve via this surgery, the patient is believed to immediately experience riddance from excessive perspiration. Apparently, post this surgery the patient may often be discharged the same day itself.