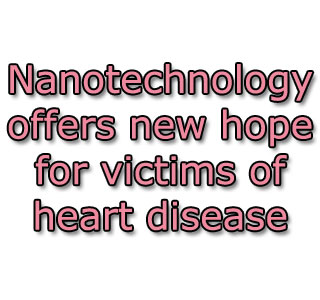 Heart disease is considered to be the leading cause of death among women. Various factors such as air pollution tend to elevate the risk of developing heart diseases. Investigators ascertain a combination of nanotechnology and adult stem cells to eradicate atherosclerotic plaque and regenerate the arteries. The results were validated after performing an experiment on pigs.

A general treatment for atherosclerosis is angioplasty wherein, the plaque is completely destroyed. During this treatment a balloon-tipped catheter may be threaded into a blocked artery and the balloon is enlarged to build back the blood flow. Although the balloon seems to be capable of squeezing plaque against the artery wall, it is unable to destroy it. As a result, 19 pigs belonging to the treatment group acquired silica-gold nanoshells and 18 animals from the control group gained saline solution.

The treatment group was further categorized in three subsets and given nanoparticles in three different ways. The first subset received it intracellularly along with adult stem cells infused into the heart. The second subset was provided through an infusion of gas-filled, protein-coated microbubbles that contained no stem cells. And for the third, nanoparticles were delivered through a bioengineered patch that also contained adult stem cells and was attached to the artery itself through minimally invasive surgery.

Kharlamov commented, “Nanoburning in combination with stem cell treatment promises demolition of plaque and functional restoration of the vessel wall.”

Plaque volume seemed to be considerably decreased in the treatment groups provided with stem cells and nanoparticles. The other two groups which were given stem cells apparently displayed signs of new blood vessel growth known as neovascularization and alteration of artery function. In the pigs belonging to the microbubble treatment group, three cases of blood clots were supposedly registered.