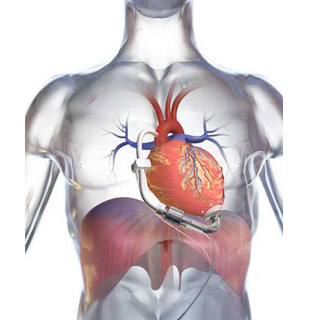 If you are at a risk of having a heart failure or you are suffering from heart related problems then here is some news that may interest you. A set of cardiac surgeons led by Professor Dr. Matthias Karck, Director of the Department of Cardiac Surgery at Heidelberg University Hospital claimed to have implanted the HeartAssist 5 ventricular assist device. The modern version of the Debakery VAD was implanted at the end of July 2009. They claim to be the first in the world to have implanted such a device.

In an effective, gentle and quite way the device supposedly enhances the pumping function of the left ventricle. The pump is made of titanium and plastic and weighs 92grams. The aorta receives blood from the weakened or failed left ventricle where blood is pumped into.

Implanted in a 50 year old woman who suffered from heart failure, experts share that she could apparently not be treated properly with medication. Owing to medical issues an alternative of heart transplant could not be considered. But now the implanted heart pump will apparently always support her heart.

Dr. Arjang Ruhparwar, senior registrar in the Department of Cardiac Surgery in Heidelberg states “The heart pump can also be used as a bridge-to-transplant while the patient waits for a matching donor heart.”

Professor Karck explains “The new device has great advantages – at only 92 g, it is the smallest and lightest approved VAD in Europe that can completely replace the function of the left ventricle and it works very quietly and effectively with a high flow coefficient,”

The well-known American cardiac surgeon at the Baylor College of Medicine in Houston, Professor Michael DeBakey in collaboration with NASA developed the Debakey VAD in the 1990s. He passed away in 2008 at the age of 99. US Company MicroMed Cardiovascular manufactured the modern version of the device, the HeartAssist 5. It is said to be a 5th generation VAD as it can be implanted next to the heart and has a private flow probe that supplies direct, precise measurement of blood flow from the left ventricle to the aorta. This small device can be supervised and controlled externally and is light and easy-to-handle. Patients can supposedly live a normal life at home.

For both adult and pediatric use, the HeartAssist 5 has CE marks in Europe. The HeartAssist 5, previously called as DeBakey VAD Child is the only FDA-approved pediatric VAD in the US. For adults a bridge-to-transplant IDE clinical study is presently under-works in the US.