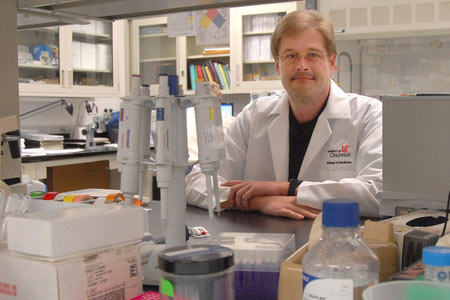 An enzyme which may be known to cause insulin resistance in muscle is supposedly also located in the brain and has a similar job there. This finding is claimed by experts at the University of Cincinnati (UC).

The detection may be a key step in obesity and metabolic research as insulin apparently plays an important part in regions of the brain that may be in charge of food intake, body weight and glucose regulation.

By means of animal models, the research team discovered that the enzyme PKC-theta was supposedly expressed in the hypothalamus, an area of the brain that may be in charge of body weight and glucose regulation. Exposure of the central nervous system to the fatty acid palmitic acid apparently stimulated hypothalamic PKC-theta in the hypothalamus. In turn, this generation apparently damaged the role of insulin as well as the hormone leptin, which may be discharged by fat cells and also supposedly plays a major part in energy intake and expenditure.

Benoit commented, “So when the PKC-theta enzyme is active—for instance, when a diet high in fat is consumed—it’s turning off insulin signaling prematurely. And that signaling cascade is important to ultimately controlling food intake and body weight. If you remove insulin and leptin signaling from the hypothalamus, an animal can become obese or diabetic—it lacks the ability to sense the correct metabolic environment. In other words, it doesn’t know that it’s full and needs to stop eating.”

According to Benoit, humans may generally consume palmitic acid through the diet, mainly in dairy products and meat. The results may have significant repercussions for nutritional counseling and drug discovery.

Benoit mentioned, “Depending on how selectively PKC-theta is expressed in the brain, the idea of inhibiting its activity represents an interesting potential new drug target.”

Benoit remarked, “We know that diets that are high in fat can cause insulin resistance very rapidly. And even if one withdraws the high-fat diet later, the impairment can remain. So understanding how that may happen in the central nervous system may have some insight for our understanding of the impact of even brief periods of certain kinds of foods.”

Benoit is of the opinion that the research may assist in offering insight into why quick changes in the regulation system could take place in response to a high-fat diet. Even something as short as a weekend binge of hamburgers, ice cream and other fatty foods would come to light.

This research was published in the September issue of the Journal of Clinical Investigation.