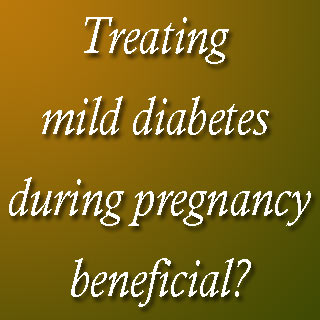 Treating constant mild diabetes which develops during pregnancy seems to assist in keeping moms and babies from putting on too much weight and results in fewer cesarean sections. Atleast this is what study experts from the University of North Carolina at Chapel Hill claim.

It was estimated that nearly 4 percent of all pregnant women in the U.S. develop gestational diabetes which results in about 135,000 cases every year. Since these women appear to have high blood sugar levels, their babies get more blood glucose than they need. Also, the additional energy is believed to have been stored as fat.

Furthermore, it was observed that these babies tend to be larger and fatter as compared to their average weight at the time of birth. As a result, they seem to be more susceptible to problems related to larger babies, such as the requirement for cesarean delivery, damage to their shoulders during birth. Additionally, they appear to be at a greater risk of becoming obese as children and developing type 2 diabetes as adults.

Supposedly, there has been an old controversy among physicians on the question of whether treating pregnant women with gestational diabetes for their high blood sugar levels would give valuable benefits. It was noted that numerous professional organizations advocate screening. However, the 2008 guidelines of the U.S. Preventive Services Task Force concluded that there could possibly be inadequate evidence to support screening and treatment of gestational diabetes.

Against this background, the Human Development Maternal-Fetal Medicine Units (MFMU) Network launched a clinical trial in order to find out if treating mothers for mild gestational diabetes could perhaps decrease infant deaths and birth-related complications. The lead author and chief investigator of this study is Mark B. Landon, M.D. of Ohio State University.

During this study, a total of 958 women who were between 24 and 31 weeks of pregnancy were randomly selected. It was observed that approximately 485 women were given treatment along with dietary changes, self blood glucose monitoring and insulin if required whereas 473 women were not given any treatment.

The findings revealed that there appeared to be no infant deaths as well as no considerable differences between the two groups in terms of babies born with problems. Apparently, these problems included hypoglycemia, hyperbilirubinemia, neonatal hyperinsulinemia and birth trauma.

“This study is important because it clearly indicates the value to mothers and their newborns of screening for and treatment of diabetes-like conditions provoked by pregnancy,” says study co-author, John M. Thorp, M.D., McAllister distinguished professor of obstetrics and gynecology at the UNC School of Medicine.

“Our work resolves a 40-year controversy in women’s health and should be immediately helpful to both pregnant women and the clinicians caring for them,” continues Thorp.

Thorp further stated that, “It’s especially intriguing that mothers in the treatment arm gained less weight during pregnancy, experienced fewer preterm births and had fewer cases of preeclampsia than mothers in the untreated group.”

The study experts concluded that these findings seem to authenticate an advantage to the identification and treatment of women with mild carbohydrate intolerance during pregnancy.